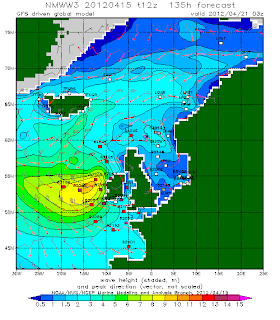 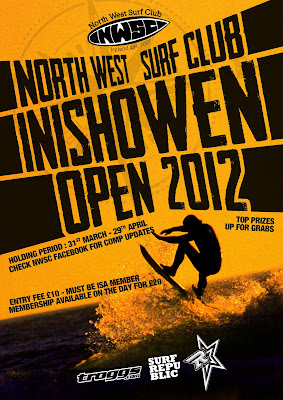 Hope everybody is surfed over the weekend with the arrival of the best swell of the season so far!!! Fingers crossed for more of the same for the up and coming NWSC'S first competition of the year which is the Inishowen open 2012 which has a holding period from 31st march to 29th April and will run on the first weekend with decent swell this is to try and maximize good waves. Loads of prizes and bragging rights should be classic. You must be an ISA member for the comp and membership is available on the day we have also attached a membership form for the club and poster for the comp. Thanks to Andy Hill @ http://www.troggs.com/ Kevin McLaughlin @ SURF REPUBLIC CLOTHING and ROSY @ ROSYSURFBOARDS for sponsoring the event 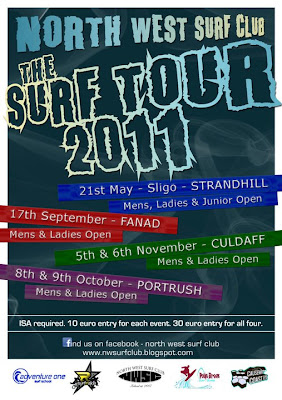 The N.W.S.C launched it's 2011 tour last night at Rosy's Skate park in Derry. There was a great turn out and plenty of new members joining the club. The tour's first comp is in Strandhill Co. Sligo on May 21st and will be run in conjunction with our friends at the County Sligo Surf Club. 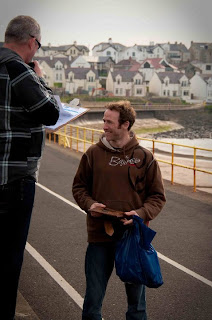 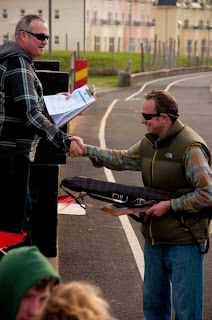 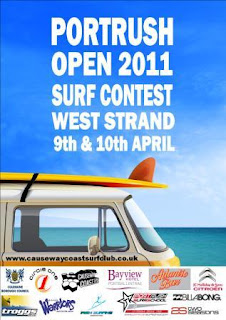 North West Surf Club members Kieron Scullion and Iain Gilmour made the finals of the Senior and Master's Divisions at the Portrush Open that took place on 9th April at West Strand, Portrush.

The event was the 3rd event on this year's ISA Championship tour. Kieron who has battled back from a serious leg break placed 4th in the Senior Men's Final, and Iain finished 3rd in the Master's Division. Both guys surfed well in the small conditions and it is great to see our club's surfers making finals at a National level.CONGRATULATIONS!!

The Irish Surfing Association will be hosting Eurosurf 2011 from the 23rd September to the 2nd October in Bundoran Co Donegal.

We are looking for volunteers to join our event Management Committee. Some of the roles will require specific skills and/or previous international event management experience, others will not require any specific skills or experience.

If you can commit your time or expertise to the event preparations and/ or the running of the event we hope you can attend our first Management Committee meeting scheduled to take place from 5- 8pm on Saturday 29th January at the Allingham Arms Hotel in Bundoran. 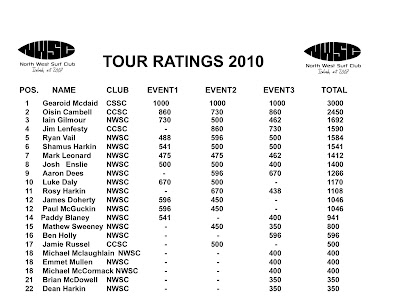 The 4th annual Wildstyle comp and the 3rd and final event on the NWSC Mini tour was run off in clean 2-3ft surf at Culdaff yesterday.

A large turnout of competitors and supporters where there to see some high quality surfing.

The day started out with running the 2 semi finals and Final of the'Clash of the Clubs' contest that had to be postponed in Portrush due to dropping swell cnditions.
The final was a tight affair with Rosy Harkin the NWSC's only surfer in the final.He was up against Jim Lenfesty and Oisin Cambell from the Causeway Club and tour leader Gearoid Mcdaid from Strandhill in Sligo.
However it was Jim Lenfesty and Gearoid Mcdaid who battled it out with the young ripper taking out Lenfesty with two solid big scoring waves.

After the final of the Clash Of The Clubs it was the Wildstyle comp that got underway, the 1st rounds were all a tightly fought affair with the youngsters making there mark again taking out the older competitors in the comp.

The final had 3 surfers under 18! Aaron Dees, Oisin Cambell and Gearoid Mcdaid with Portrush local Jim Lenfesty the only senior surfer making it to the final.
Oisin Cambell and Jim Lenfesty both started well scoring highly on there waves with Cambell pulling off a massive floater. Aaron Dees caught one or two nice lefts and carved some nice cutbacks while young Gearoid Mcdaid stayed over on the lefts getting a few nice ones too. But it wasn't till the final 2 minutes that Gearoid pulled the best wave of the day out of the bag, scoring 8.5 with two of the judges after demolishing the wave with 3 big of the lips and two full roundhouse cutbacks. The crowd went ballistic and the hooter sounded to finish off another great Wildstyle event.

The club would like to thank all the competitors who travelled to the comps from as far as Sligo and Belfast. We'd also like to thank Rosy SurfnSkate for there continuing support of the club and its events.

If you want more info or if you've got something to tell us, contact us on nwsurfclub@gmail.com